Between the ages of 19 and about 24, I worked at the Eaglehawk branch of the State Bank of Victoria/Commonwealth Bank. Eaglehawk is a suburb of Bendigo, in Central Victoria. I can't say that I loved being a bank teller. But I did truly love speaking to the regulars on pension day. It is amazing just how much one can fit into fortnightly, five minute conversations at the bank.

One pension day, one of the regulars told me he was moving out of his home and moving in with his daughter. He had been quite saddened, sorting through his belongings and memories, as he prepared to leave the home where he had spent his entire married life.

Much to my surprise, he had remembered that I was a stitcher. He explained that he had brought me a gift, something he wanted to pass on to someone who understood. His late wife had needlepointed these in her early teens. I think it may have been a school assignment. He said he couldn't bear to throw them out and thought I would appreciate them. 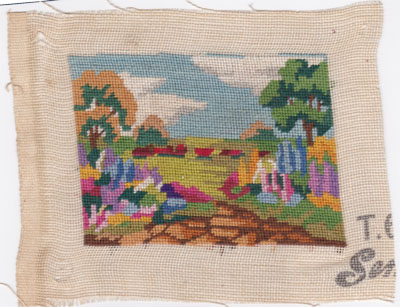 Well I absolutely do. Such a precious thing to receive and be trusted with. 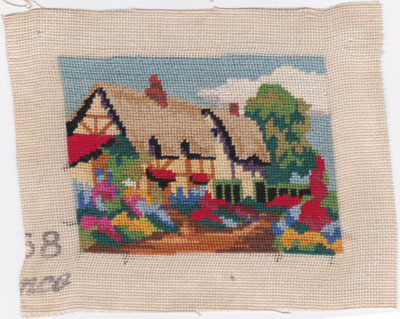 I wish I knew exactly when and where they had been stitched. Judging by the age of "my banking friend" and thinking about when his wife may have been at school… I think it may have been in the 1920's or just after.

I often think about the colours. Wondering if this combination of colours is due to choice or a matter of what was available. I have seen similar "bright" needlepoints, often in frames, in op-shops and the like. So maybe it was the style of the day. I would love to know.

I've noticed the drawing pin indents in the corners. Do you think these pieces have been "blocked" already, without success? Sometimes I've thought about blocking them myself to "fix" the fabric distortion. But, the dampening process may cause the colour to run… so I think I will leave them alone, and continue to love them just as they are.